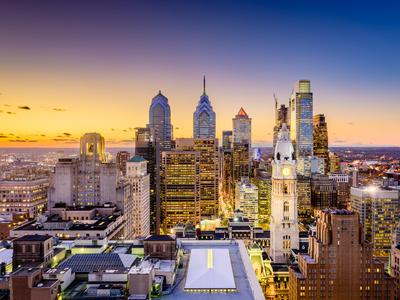 How long is the flight to Pennsylvania?

An average direct flight from New Zealand to Pennsylvania takes 33h 53m, covering a distance of 14321 km. The most popular route is Queenstown - Harrisburg with an average flight time of 22h 05m.

What is the cheapest flight to Pennsylvania?

What are the most popular destinations in Pennsylvania?

Cons: "Delayed on tarmac 20mins in Chicago, then delayed getting to the get in Philly, bags took 40 mins to get to carousel"

Pros: "Crew was nice"
Cons: "I hated my seat. Last row. Seat didn’t recline. Right next to the bathroom. That should not even be a row for passengers!"

Cons: "Luggage took 30 minutes to get to pickup and it was covered in vinegar. The snacks on the ride really stink. A little bag of pretzels. Boarding and I boarding took forever"

Pros: "Had an entire row to myself. So I stretched out to sleep all the way on the red eye."

Pros: "not much"
Cons: "too many crying babies"

Pros: "Flight was on time. Everything went smooth for being in coach."

Pros: "There were some great employees but unfortunately one of the team didn't share their personality"
Cons: "There was one employee or steward who just didn't seem to want to be there did his job but compared to the others was not on the same page of the team"

Pros: "Food was great."
Cons: "The WiFi was horrible. The provided movies to watch would constantly buffer."

Pros: "I was able to make my flight."
Cons: "Crew were not friendly or helpful while boarding."

Pros: "Associates were nice and knowledgeable. The airplanes were comfortable. Love the onetime performance of scheduling."
Cons: "Unite Airline performance wasn't the good. Also, there was nobody in Chicago to help us with the transferring process."

Cons: "The Kayak interface messed up my flight schedule and I ended up getting a non refundable and unchangeable ticket. I lost all my money on that ticket. No more Kayak for me. Ever."

Pros: "The fact that we got there safely."
Cons: "Took them 90 minutes to fix a seat belt because they kept bringing the wrong part. They got it right the third try. The cabin crew sat in the back and chatted for an hour while we sat at gate. Not even a glass of water offered. Then we were diverted to Pittsburg because of weather and sat for an hour. Again no water offered. So on 5 plus hour flight crew went around once. The final straw was they blamed weather for the delay when in fact it was not being able to find the correct seat belt in due time."

Cons: "Flight was delayed Before we boarded but then once we boarded we Sat for another hour."

Pros: "FREE TV on the plane....all planes should have it."

Pros: "Everything"
Cons: "Nothing"

Pros: "Crew was proficient."
Cons: "Seating was compact, reminded me of the buses that run from Mexico to the US. "Let's see how many we can fit in there?" Rubbing elbows the entire time."

Cons: "Flight never happened. American Airlines saved the day. It seems to me, the issues with United are deeper than we ever thought. I was highly disappointed with their inability to rectify the situation."

Cons: "i sat in front of the exit row which was feeezing. My boyfriend and I needed extra blankets because it is a red eye and sleeping is important but they would not give them to us. We were pretty much shivering the entire way home and could not sleep."

Pros: "The crew was ok for the type of company they are."
Cons: "The plane was absolutely horrendous. Really uncomfortable. No TV, no outlet to plug in my own device. And garbage wifi."

Cons: "Lost bags and unable to have bags delivered as instructed. Unprofessional driver and still no resolution for receiving lost item."

Cons: "Internet was down the whole time"

Cons: "I hated not having access to movies on my personal device."

Pros: "Flihht was cancelled night before. Rep said impossoble to get him home the same day. Looking online there were flights available, just more expensive and doesnt follow their policy. Very disapointed"

Pros: "very smooth and fast"
Cons: "some of the united employees were rude"

Pros: "Boarding on time, wi-Fi entertainment and staff were friendly"
Cons: "Nothing to suggest"

Pros: "I did like that we boarded quickly and efficiently. The attendants were very respectful and kept very quiet throughout their food and beverage service so others could sleep which was quite professional."
Cons: "I didn't like that the only guy on the flight that kept his light on the entire trip had to sit next to me. I was able to sleep regardless, and I understand that it is out of the control of the crew or myself or anyone but that guy... but that was less than desirable. Other than that, great flight."

Pros: "Everything went smoothly and as planned"

Pros: "Comfortable the entire trip! 1st class is the only way I will travel any more especially flying all the way across the country! Thank you United!"

Cons: "There was a sick passenger on board. The crew spent 40 minutes trying to convince him to get off the plane. He refused and after 40 minutes, they left him on and we finally left the gate."

Cons: "The Flight was late taking off with no explanation. We were on the plane for an hour prior to takeoff with no AC. The cabin was extremely uncomfortable."

Pros: "flight attendants were pleasant. plane was clean"
Cons: "I was stuck with commercials for direct tv, two feet from my face the whole trip. I would push the button to turn tv off but it would come back on less than five minutes latter. I had my head phones in listening to personal device but was still distracting. speaker for announcements were extremely loud. the poor lady next to me would jump and then plug her ears. question, if you are allowed one carry on and one personal bag, why do you only have space for a third of the passengers to stow said bags?"

Pros: "honestly nothing"
Cons: "Both my flights were delayed. The seats are cramped and uncomfortable. They don't give any food at all. There is no free entertainment."

Pros: "We were slightly delayed departing because of a mechanical concern. Thankfully there was nothing wrong so we departed within a few minutes. To compensate the pilot authorized free direct TV for the flight. Very nice I enjoyed a movie. We landed on time."
Cons: "Direct TV cut out for a couple minutes."

Masks required on board, masks provided on flights to Pennsylvania

Middle seats unavailable to book on flights to Pennsylvania

Testing for antibodies, testing for symptoms for flights to Pennsylvania