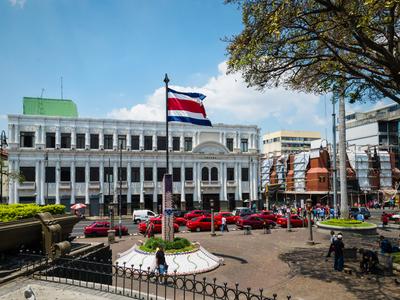 How long is the flight to Costa Rica?

An average direct flight from New Zealand to Costa Rica takes 37h 07m, covering a distance of 11743 km. The most popular route is Auckland - San José with an average flight time of 28h 00m.

What is the cheapest flight to Costa Rica?

What is the most popular destination in Costa Rica?

Based on KAYAK flight searches, the most popular destination is San José (100% of total searches to Costa Rica).

Cons: "For United to go out of business"

Pros: "The food and the crew"
Cons: "Entertainment system, it is outdated"

Pros: "The staff was nice and helpful"
Cons: "The seats are not comfortable and not enough space. Not ideal for a long flight"

Cons: "Service for people not able to sleep on the long haul"

Pros: "The staff was accommodating and worked hard to make us more comfortable and be helpful when possible- there was a lot of turbulence so dinner was served late and there was a lot of time we couldn't move about but they made the best of it."
Cons: "The added benefits of the Air New Zealand long flight planes of the entertainment like mini games and the footrest into bed as well as my husband and I not being seated in between two people but being on one side or the other."

Cons: "Food ran out and only one choice"

Cons: "Flight was canceled due to United's mismanagement of crews."

Pros: "Clean, comfortable and on time."
Cons: "Nothing"

Cons: "No screens in the seats. Food options are the usual limited fair"

Cons: "I’m 6’3, misty in my legs, so the diminishing legroom is a problem. Can’t afford business class either. You should really have entertainment for a 5 hr flight."

Pros: "After United lost our luggage in Houston we had to file a claim in Auckland which meant we missed our flight to Wellington. Ground crew were super helpful and got us on the next flight 30 mins later. Cabin crew were great and sorted us out with water and snacks before take off as could tell we were desperate after flying in from London via Houston."
Cons: "-"

Cons: "Slow boarding, no food no drinks, no tv."

Cons: "they changed our flight without notifying us! they messed up our seats and asked my mother to deplane! when we were flying with twin babies! they also gave us grief about gate checking something on the trip home that we had no problems with on the way there. honestly i will never fly united again."

Pros: "We made it to our destination on time"
Cons: "Extremely cramped seating. Terrible food"

Pros: "No one was in my row, so I had the opportunity to lay down and stretch out!"
Cons: "The crew didn’t seem to inviting. There was one woman who was very kind... but other than that, they all seemed like they hated thief jobs... the food was very bland."

Pros: "The pilot"
Cons: "Everything else"

Pros: "Entertainment was actually good"
Cons: "Not very good food but I guess they gave ice cream so maybe that made up for it? Not super comfortable seats/room."

Pros: "The movie choices were the only saving grace."
Cons: "They split up my family and were not accommodating in helping to find seats near each other. Flight attendants were rude. Requested a veggie meal and got chicken. Seats didn't recline."

Pros: "Entertainment worked on this flight! And once again, I had an empty seat next to me - that's always a huge plus so I can stretch a bit."

Pros: "The flight crew was very attentive and friendly. Probably one of the nicest crews I have encountered on my flights."
Cons: "Me and this other person were waiting in the back for the two bathrooms to become available. We waited over 10 minutes."

Pros: "No complaints here! The Air New Zealand staff were amazing. They did their jobs really well! They made everyone comfortable during the trip."

Pros: "The plane took two hours to leave the ground due to weather. This was unfortunate and made the passengers uncomfortable but it was not the fault of the airline."
Cons: "The airline gave all the passengers access to the movies and television channels."

Pros: "So they lost my bag but where super helpful and nice!"

Pros: "First flight delayed once board to check a broken light. Then waisted 40 minutes taxiing on tarmac in Houston because they couldn't find a gate. Missed our connection. They put us up in a low end hotel overnight. Then we had our morning flight again delayed as we waited for planes to the take off, so further delays. Arrived in Costa Rica 1 hour late. Now with too many other flights so immigration packed and took another hour and twenty minutes (when we finished there was only a 5 minute wait). Thanks United"
Cons: "Coffee and cookies. Moscow mule"

Pros: "Crew was very helpful especially with looking up connecting flights due to most people missing their connection."
Cons: "The delay, but what can you do. The seats are not comfortable when you're short."

Pros: "I was allowed to get off the aircraft to collect a bag I left behind"

Pros: "Attendants were amazing"
Cons: "We spent the whole delay on the plane and wasn't notified of a problem until after an hour. A lot of my time was wasted. That's not okay. Keep your customers informed."

Pros: "The boarding process is terrible, because communication breakdown is inevitable. The crew on the plane are sometimes rude, and have no patience when passing seated passengers. One air hostess constantly bumped into my arm like a bull as she passed walking down the isle. Entertainment is practically non-existent on long flights unless you pay for it. Two of my flights were cancelled last minute with little to no remorse, and I had to wait 2 days to catch the next flight. That flight was even delayed more than an hour. I was sick by time I reached my destination. Overall, United would not be my 1st choice due to bad experiences numerous times."

Pros: "Since we were the last ones to arrive at the gate because of our delayed flight they had to check our carry-on baggage with the luggage we didn't have locks and nomally what we carry in that bag are fragile or valuable things. They should at least have plastic gauzes or fragile stickers to put on the bags. I don't know the reason but the flight attendants left about the last 6 rows of passengers without pretzels or drinks. There was no device to view movies. Leg space too tight."

Pros: "Nice and comfy seats, good service on plane, fast boarding"
Cons: "No good food and the entertainment was not the beat"

Pros: "Just the crew"
Cons: "Now when I fly united i feel like flying with spirit or jet blue o any other cheap airline, they charge for everything but sodas. They don't even carry blankets. The fact that for a long (3h- 4h and 5h) flight (took 4 overall during the holidays) united didn't offered ONE movie for free at least was very disappointing. Not one of my flights were on-time!"

Cons: "Polaris Biz servie was worse than old biz class service. Only six salmon dinners aboard! Cabin crew needed to asked for many standard items. After dinner service, they were invisible. Brkfst was rushed in last hour before touch down. This was a real disappointment after an excellent flight from LAX to MEL! We can fly AA for such service at a lower price!"

Cons: "Same. No ffood ..poor Service and allso charging. To much for extra weight. $200 for 3 extra pounds. Ridiculous. Also charged for one check in bag..Todo much"

Pros: "The crew were nice though exasperated with cramped new planes and crowded restrooms. Flight was on time"
Cons: "After three years of flying all around US, realized United is the worst of the three major legacy carriers. I'm star alliance gold and it's still a painful experience. Crew admitted in latest redesign of planes they've managed to squeeze another six seats in coach. My seat wouldn't go back but even if it did, would feel too guilty for person behind to do it - so little legroom on newer planes. They've also cut down on restrooms so for most of the flight there was a line of 5-6 people waiting in the aisle. American Airlines seems to have older planes but at least decent legroom (and I'm not tall - anybody over 5'10 would have to sit at an angle on new United planes!). Been very impressed by Delta's service lately. United feels more like Spirit"

Pros: "Crew was great, food was good, and had a superb entertainment selection."
Cons: "Comfort was as issue, I was assigned more leg room at the emergency row and the wall would be pushing against me, forcing me to go towards my neighbors side. Also, I had initially picked the last row to sit on, which was stated on my itinerary but when I printed my boarding pass, I got assigned middle of plane - which I did not understand nor complain about."

Pros: "Arrived a bit early to the destination."
Cons: "Every time the crew came by with something (more food, duty free, custom forms) (which seemed very regularly) it was announced over the intercom so it made sleeping very difficult on the 11 hour red eye flight. Other airlines will just walk by and catch your eye if you are awake. Seats were quite small as well."

Pros: "I like the entertainment screen and the food was tasty"
Cons: "My seat...not being able to pick an aisle seat. Also the passenger behind me kept doing something with her seat pocket and I could feel that everytime. Need more padding there. And halfway through the flight the screen quit working."

Pros: "The Air NZ FLight from Aickland to San Francisco was operated by United Airlines. The seat had excellent leg room. The attendants were very pleasant and available throughout."
Cons: "When I first border the plane there was another passes egg in my allocated seat. The selection of movies available was only okay. their is only a minimal number of toilets for the number of passengers and one of them was out of paper when I went or use it. But they were always clean."

Pros: "The staff was really polite and were willig to answer all questions with a smile."
Cons: "The seat I was on could not be reclined. This was most unpleasant because it was an overnight flight. You should earn the clients - even economy passengers - when this seat is the one being assigned to them. I would payed beforehand to get a more comfortable seat if I'd known I was to fly on a no-reclining seat on an overnight flight."

Masks required on board, masks provided on flights to Costa Rica

Middle seats unavailable to book on flights to Costa Rica

Testing for antibodies, testing for symptoms for flights to Costa Rica