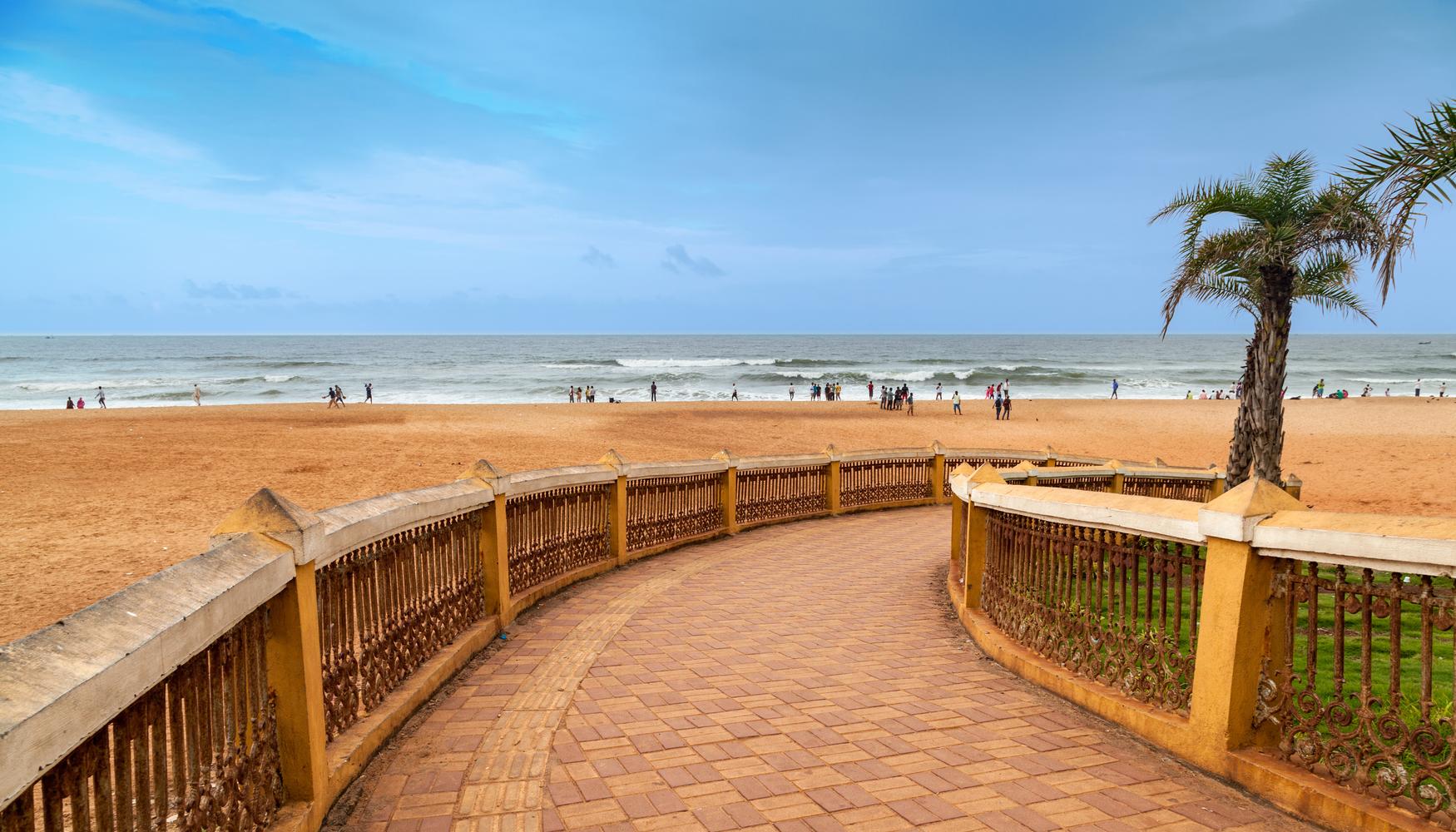 You're Going to Love Calangute

If Goa is the land of glorious sunsets, magnificent sandy beaches, and colorful markets, then Calangute is the jewel in its crown. Friendly locals, a beach to surpass all others, and a host of activities and attractions for all ages: Calangute is one of those unforgettable places you'll want to revisit again and again. 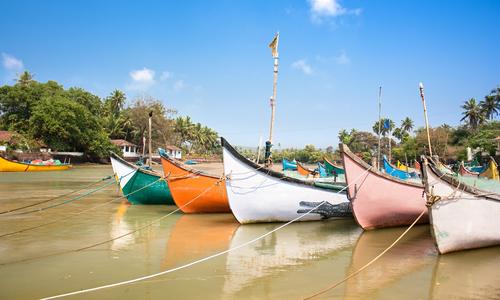 Although it's on the beach party circuit, there's more to Calangute than the occasional moonlight rave. The bars and clubs of Tito's Lane at the Baga end of the beach are open late, and many venues present local and international musicians and DJs on a regular basis. If you're a gourmandizer rather than a clubber, the town's eclectic range of restaurants serve up some of the tastiest food in northern Goa.

Once part of the hippie trail, Calangute exudes an air of freedom and creativity. Its stylish galleries offer temporary and permanent exhibitions throughout the year, while its famous markets are an essential stop for both locals and visitors.

And let's not forget the beach. An exquisite swathe of soft, shimmering sand fringed with beach shacks and vibrant bars against a lush tropical backdrop - it's one of the very best reasons to add Calangute to your list of must-see destinations.

It's difficult to over rate Calangute's fabulous beach. It's northern Goa's largest and, although it's busier than some, it's one of the most beautiful and richly deserves its nickname "Queen of Beaches". Stretching from Baga to Candolim, the magnificent curve of golden sand is lapped by the warm blue waters of the Arabian Sea.

Calangute is a wonderful mix of traditional Indian and Portuguese colonial architecture. Highlights include Portuguese buildings dating from the 17th century such as St. Alex Church and Reis Magos Fort and the beautiful Shanta Durga Hindu temple, which was built in the 1730s.

Calangute beach life can be slow and relaxing or a whirl of exciting sports and activities. Sailing and parasailing are ideal for the more laid-back beachgoer, while active types can try everything from stand-up paddle boards to water skiing.

4. It's a Bargain Lover's Paradise

Forget glossy malls and department stores, nothing beats the experience of bargain hunting Goa-style. Local flea markets are a thrill for the senses. Spend Wednesday in Anjuna for the weekly flea market or head to Calangute Bazaar each Saturday morning.

Hire a bicycle and explore the meandering streets of Calangute or take a bus tour of the surrounding villages and jungle. The sudden sights of a colonial church against a lush jungle background, an elephant on a spice plantation, or beams of sunlight bouncing off a sparking waterfall are hard to beat.

What to do in Calangute

1. Spend the Day on the Beach

The beach is an integral part of local life and where local families go to relax and socialize. Top up your tan on its warm, sugary sands or try a spot of swimming. Grab a drink or snack from a beach shack before sitting back to watch the day's main event, the magnificent Goa sunset.

Built by the Portuguese during the 17th century, Fort Aguada dominates the headland at Candolim Beach to the south. It's an architectural marvel of paved walkways and fortified ramparts, and its well-preserved lighthouse was once a reference point for mariners.

Parasailing is a must-try when you're in Calangute. See the amazing beaches of Goa from the air as you float over the azure blue depths of the Arabian Sea. If you're not keen on heights, take a boat trip to enjoy the superb coast from a lower perspective.

4. Grab a Bargain at Calangute Bazaar

Calangute's very own flea market is best known for Kashmiri and Tibetan goods. However, you'll also find an impressive array of swimwear and clothing, local arts, crafts, and hand-made jewelry. Be prepared to negotiate to get the best price! Once you've grabbed that great sarong, enjoy a Thai massage or stroll down to the banks of the nearby Mandovi River to spot dolphins or crocodiles.

Catch exhibitions of paintings and sculptures by a host of renowned artists at this popular local gallery. The Kerkar Art Complex also presents a weekly evening of Indian music and dance.

When to Visit Calangute

Thanks to its southern hemisphere location, summer runs from November until February in Calangute. It's also considered the best period for vacations with guaranteed sunshine and average temperatures of 81°F. Although daily rainfall is a feature of the monsoon seasons from October to January and February until May, downpours tend to be short and heavy, and you'll enjoy less crowded streets and beaches and lower hotel and restaurant prices.

How to Get to Calangute

Overseas travelers can choose from a wide range of international flights between major US and European cities and Hyderabad, Delhi, and Mumbai. Mumbai is the most convenient option for Goa and from there, local flights offer daily links to Vasco da Gama Airport in Dabolim. There is only one direct bus from the airport to Calangute, and it departs at 11.00 a.m. If that doesn't fit your arrival times, local bus services have two fairly easy changes en route, but it's the cheapest option at around Rs. 100.

India has an impressive, if busy, rail network so it's best to book in advance if you plan to travel during the summer season. The closest station to Calangute is Thivim, and you can complete the last 9.3 miles of your journey by bus or take a tuk-tuk for Rs. 400.

Because trains are often fully booked in summer, lots of people choose to drive instead. Hire a car and make the trip from Mumbai via the NH48 toll road and the NH66 in about 12 hours.

There are no direct buses from Mumbai or other major cities to Calangute at present. However, you could get the Red Bus service from Dadar Bus Stand in Mumbai to Anjuna Charrasta. The fare is Rs. 1,281.65 for a single journey and from Anjuna Charrasta it's just a short taxi ride to Calangute.

Where to Stay in Calangute

There are almost 3,000 hotels to choose from in and around Calangute, so you're certain of finding one that fits your requirements and budget. Inexpensive basic rooms can be found at the Ave Maria Beach Resort, Rivasa Resort, and Hotel Orchid De Goa, while mid-range hotels like ibis Styles Goa Calangute and Calangute Grande are ideal for families. For those looking for somewhere that combines a great location with a little luxury, try Novotel Goa Shrem, Novotel Goa Resort And Spa, or the Villa Calangute. The best areas to stay include the Baga end of Calangute beach if you want to be close to the bustling clubs and bars of Tito's Lane or the southern part of the beach if you prefer things a little quieter.

Where to stay in popular areas of Calangute

Most booked hotels in Calangute

How to Get Around Calangute

Public transport includes buses, taxis, tuk-tuks, and rickshaws. It's cheap to get around, and most places are within walking distance. If you do want to take the bus, just stick your arm out as designated stops are almost non-existent. A typical journey within the city costs just Rs. 10.

Taxis are the most expensive way to travel as there are no meters and drivers tend to set their own prices. Try taking a tuk-tuk or auto rickshaw instead for about Rs. 10.

Lots of visitors choose to hire cars, and having your own vehicle makes it so much easier to explore Goa. Expect to pay about Rs. 360 per day with reputable companies like Avis.

The Cost of Living in Calangute

Go to Baga Road for food, clothes, and electronics, or visit one of the local flea markets for bargains of every description. The Calangute Bazaar offers arts and crafts and products from Tibet and Kashmir.

Street markets are the ideal way to shop for fruit, meat, and fresh vegetables. You can also pick up basics from local supermarkets like Newton's Supermarket and Modern Supermarket. Prices are low; 12 eggs should cost just Rs. 64.44 and a bottle of local beer about Rs. 60.

Where to Eat in Calangute

You'll be spoiled for choice when it comes to eating in Calangute. Planning a romantic meal? Pousada by the Beach is a stylish boutique hotel and the popular restaurant serves fresh fish and seafood dishes with a Portuguese slant. Visit Chef Soumyen's Kitchen or Le Jardin for contemporary European cuisine in a friendly al fresco setting. Or, spend the evening at Curlies Beach Shack where you can sip cocktails and sample Goan dishes like cafrael before dancing the night away to live music. Expect to pay Rs. 180 for a quick beach shack lunch or upwards of Rs. 2,500 for dinner and wine for two in an upmarket restaurant.