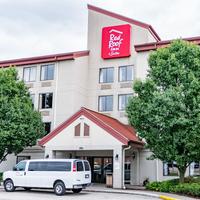 Okay
based on 463 reviews
Compare vs KAYAK |

Every guestroom at the hotel includes a microwave, mini-refrigerator, large flat-screen television, and a work desk. There is a complimentary continental breakfast buffet, as well as free coffee in the lobby. A picnic area can be found outside for guests to use as well as coin laundry services. Free parking is available and there is a complimentary airport shuttle. Wireless Internet access can be found in every room and pets are welcome at the hotel.

There are many different restaurants at the Red Roof Inn & Suites near the Indianapolis Airport including the Library Restaurant and Pub for American cuisine, the Tamale Place for Latin food, Major Restaurant for Ethiopian fare, and Thai Town Cuisine for Asian dishes. Other popular dining destinations include Kazablanka, Granite City Food and Brewery, Working Man’s Friend Tavern, Culver’s, and Big Woods Speedway.

There is plenty to do in this area of Indianapolis with Bad Axe Throwing, HandleBar Indy, Victory Field, and Segway Tours of Indianapolis within five miles of the hotel. Other attractions to enjoy include the Indiana Repertory Theatre, Benjamin Harrison Presidential Site, Indian War Memorial, and the White River State Park.

How far is Red Roof Inn & Suites Indianapolis Airport from the airport?

Does Red Roof Inn & Suites Indianapolis Airport have a pool?

No, Red Roof Inn & Suites Indianapolis Airport does not have a pool on-site.

Learn about Indianapolis on KAYAK